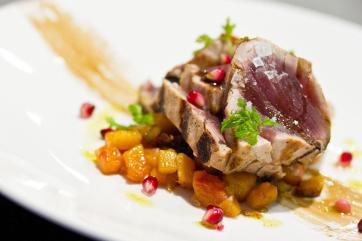 I suppose it should come as no shock that the restaurant in the Four Seasons is excellent, because after having now eaten at five of them (New York, Toronto, Atlanta, Istanbul & Chicago), the only shock would be if it wasn’t superb. After all, that’s just how they roll- four knives or better, or four get it. And unFOURgettable it was (okay, I’m done with the “four” puns). A farm to table tour de FOURce (I lied) that would make the Department of Agriculture proud.

Feeling a bit chunky, however, I didn’t go all in, deciding to keep it lite with choices like the white asparagus gazpacho accented with marcona almonds, grapes and smoked trout roe. It was one of the best cold soups I’ve ever had and everything I was hoping it would be. Full of flavor, not calories. And as fresh as The Prince of Bel Air.

The other half of my soup and salad duo was a roasted carrot salad comprised of marinated wheat berries, lime yogurt, bitter greens, pistachio and some mysterious form of heat. I’m gonna go with chile. It was like Bugs Bunny’s wet dream on a plate. Ew… I think I might’ve even grossed myself out on that one. But assuming I didn’t just ruin it for you, this is a must get. Trust me. You need this.

Then, wash it all down with an excellent sav blanc from South Africa and you will be happier than Pharrell on Zoloft.

I have been wanting to try this place for a while now, but after hearing that it is the sister restaurant to The Gander, my eagerness waned. Perhaps a blessing in disguise though, because low expectations are always easier to hurdle, and Recette most certainly sailed over them.

The space is intimate, which is sort of the restaurant version of “cozy” in NYC apartment listings, meaning “small.” But it’s walled with beautiful divided light windows, so it feels more open. As for the décor itself, apart from the windows it’s not very memorable.

The service and meal however, left quite the impression. Our waiter managing to strike that perfect balance between attentive, professional and down to earth.

Unfortunately the wine list was quite the opposite of down to earth, priced in a much higher stratosphere with only a very small handful of options below a C-note. Luckily the one I chose was not too crazy and not too shabby, a 2006 Barolo priced right on the threshold.

Things began with the bone marrow toast, complemented by trout roe to give it a nice burst of saltiness amidst the richiness. And while it was good, it also felt reminiscent of so many dishes at The Gander. Good, but not quite great.

But as regret started to seep in, that’s when the tide turned, and my use of an oceanic term was purposeful, because the next two dishes not only came from the sea, they are both Ultimates. The first being the best sashimi I’ve ever had. Incredibly fresh red snapper adorned with oyster crisps and chili peppers packing more heat than Keanu Reeves in The Matrix. The other Ultimate came in the form of the most ridiculously creamy langoustines I’ve ever had. So buttery soft, they were practically worth starting a new religion over. And you really didn’t need any of the surrounding elements, like the pork croquette and the flan. They were life-changing-awesome all by themselves.

After that, came the spaghetti with sweet shrimp and sea urchin, which was also good, but was doomed from the get-go. First because it’s been touted as one of the best pasta dishes in the city, and it’s not. And second, because after the previous two dishes, it was an impossible act to follow.

And closing out the “small plates” was the pork belly. Now, I’m not sure if they were going after irony here, but this was easily the biggest portion of pork belly I’ve ever been served in my life. It was the size of a brick and could handily serve four ravenous wolves. And while that may sound awesome, truth be told it was a bit too massive making the harissa to belly ratio a bit anemic. Fortunately the maple glaze carried it, but nailed it was not.

Sadly, things continued on the downward spiral through dessert. The highly recommended s’more, while good, fell a chasm short of the ones at Marc Forgione and Cindy’s Backstreet Kitchen. And the apple upside down cake should remain that way, face down in shame. Had two bites and done. The best of the lot was actually the free dessert that came with the check, a devil’s food cookie with a hint of chili. My advice, forgo the desserts and put that money into the wine.

So a very accurate Yelp rating for once, 3.5 stars. But since I don’t do halves, I’m going 4 knives. After all, they did have two Ultimates.