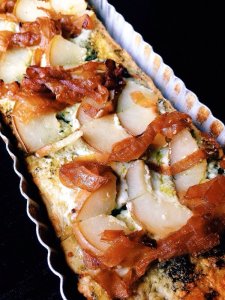 Having never been to this suburb of Seattle before (unfortunately sharing the same name as a mental institution), I imagine this place does quite well for itself considering the options around it aren’t exactly aplenty. And with its massive industrial loft décor, small plates and vino selection it would most likely be a standout in most suburbs. Granted, as I understand it, there’s also one downtown, the original, off which I’m guessing it drafts its cool.

Other coolness to be had would include the crispy garlic shrimp, the blasted broccoli and the beets smothered in melted cheese (tastes less weird than it sounds or looks), which we didn’t even order, but I’m always in favor of tasty mistakes. Right up there with happy accidents.

The cool started to thaw, however with the pulled pork tacos, which were just okay, as were the shishito peppers, which are never bad, but are also very guilty at this point of a “tried one, you’ve tried ‘em all.” Seriously, I’ve had this dish at over a dozen restaurants and I’ve yet to find a place that can screw it up.

On that note, there were a couple of screw-ups. The pear and gorgonzola flatbread (pictured) is garbage, with its horrendously overpowering crust. You can get better flatbreads out of the freezer case at Whole Foods and Trader Joe’s. But worse still was the spicy coconut lemon ginger ceviche. It wasn’t spicy. It wasn’t lemony. Not even coconutty or gingery. It was however crappy and unworthy and the blandest ceviche I’ve ever had.

Now I don’t want to blacklist Black Bottle just because the wheels came off toward the end, because there truly is potential in them thar hills, but I also don’t want to oversell this place either. It’s good if your in the hood. If you’re not, don’t step over anyone chasing after a 4 star experience that isn’t there. #yelphype.