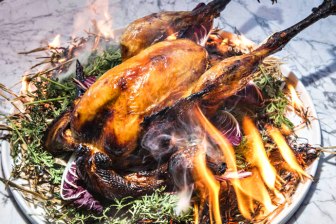 I am shell-shocked. Get it? But seriously, I was not expecting this place to be anywhere near as fantabulous as it was. Charming the pants off me from the moment I stepped through the door with its small, casual meets quaint dining room, down to Earth service and killer grub. Almost reminds me of Pearl & Ash (RIP), one of my top 5 favorites in the city.

So how did I love thee? Let me count the ways. One, the bread. I know it’s six friggin bucks, which is absolutely absurd, made only worse once you see what that six dollars actually buys you- a small hunk of bread with some weird, green spread next to it. But trust me, once you take a bite with that killer wasabi spread, your bitching and moaning will turn into patting yourself on the back and ordering seconds.

Another simple starter that will blow your socks off is the charred broccoli salad. So much depth of flavor and yet as basic as it gets. And speaking of basics, the classic Cacio e Pepe (cheese and pepper) is nailed like Bob the Builder on meth with a twin-barrel nail gun and something to prove.

Better still was the oxtail risotto which was so rich it will probably benefit from Trump’s new tax cuts. Even the Whole Sasso Chicken (pictured) was quite impressive from flaming presentation to palate. Far more of a crowd-pleaser than Le Coq Rico, and half the price.

But as good as everything was, the best two things of the night were the scallops and the dorado. Both flawlessly cooked and magically prepared in a way that celebrated the flavors of the fish, while also showcasing the chef’s creativity and command of ingredients.

As we sailed toward the glorious promised land of five knives, sadly twas not to be as Le Turtle stumbled. The foie gras, while decent, comes with a stark warning – our waitress told us it was seared and it was actually terrine. Major issue for me and she should’ve comped the dish because I wouldn’t have ordered it had I known.

More egregious still, were the lame desserts of which they only offered two and neither were good. For shame! If you’re going to have such a small dessert menu at least make sure one of them is worth it! But hey, not even Lebron hits every shot, so I will not only forgive Le Turtle, I will return. As fast as a hare.