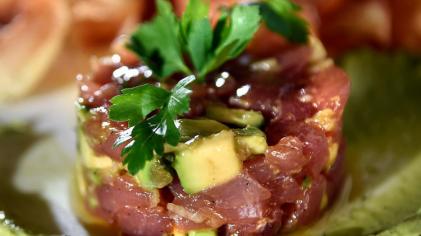 Located across the street from the train station, Harvest makes for a great place to eat either right before a train or right after, at the end of a long workday when no one at home wants to cook and you’re not sure what you want to eat (guilty as charged), Harvest offers a jack of all trades menu with a few hits, a few misses and a lot of creativity.

Starting with the wines by the glass, you will find Conundrums in both red and white. So right there you have two solid reasons to visit. The vibe is also pretty cool, although the crowd both times I ate here was a bit sparse.

In round one, I enjoyed the veal chop, prepared with a red wine truffle glaze, creamy spinach, baby carrots and parmesan. But the real winners were salmon tartar with jalapenos, baby arugula, lemon zest and potato chips for salty scooping. So yum.

The surprise winner for me was the crispy artichoke starter. It just sounds and looks like it’ll be heavy, but somehow they are magically light and wonderful. So much so that this was my favorite thing.

Come round two I found the pear and endive salad to be decent but the octopus start is a big miss. Only because of its chewy consistency. The preparation is actually quite good. Basic, but good. Mainly avocados, tomato and red peppers. And funny enough, the exact same prep was used on my favorite dish of round two, the crispy crab cakes.

Now I just need to return and get the artichokes and the crab cakes and I’ll have the perfect meal. 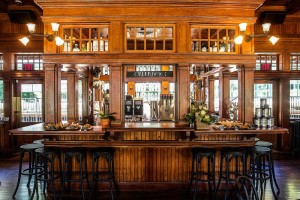 I’ll give the place an A for effort, but sadly the exchange rate of A’s to knives isn’t a favorable one. But before leaping all the way to the end, let’s discuss how we got there.

Located in the Chappaqua train station, as the uninventive name suggests, it seems to be taking a page out of like-minded restaurants (Via Vanti & Iron Horse) both one stop up and down on the Harlem line. That said, CTS is more of a bar with small plates. The wine selection is rather thin, however, whereas the cocktails go much deeper, which is strange for a place that sports a menu predominantly made up of charcuterie and cheese.

Also strange is the décor, if you can call it that. Basically all they did was stick a big bar (pictured) in the middle of the room and tables around it (albeit the space was already nice as is, I suppose). Then, they converted the café next to the main room into the kitchen, if you can call it that as well. More of a prep area if you ask me. And considering you’re on my blog it would appear you are asking. Oh, and one more thing. The seemingly intimate back right corner by the velvet red curtain is anything but. DO NOT SIT THERE. On the other side of the curtain is wait station where they will come and go repeatedly carrying dirty vats of water and other undesirable cargo.

Service is a variation on the Bar Taco method, using a check box menu, but somehow less fun and a touch cheap, because CTS uses laminated cards and red Sharpie’s. Also not helping the cheap vibe is the use of paper plates.

Among the small plates, the best things by far were the wine and cheese/charcuterie, but that’s not to say that even that was good. More passable than anything. The cheeses out shining the meat, even with such hopefuls as salami with pistachios and lemon zest, or the even more underwhelming salami with coriander and chili. On the cheese side, we went camembert, Vermont cheddar and bleu, and all three were solid. And while they surround the board with goodies such as jam, mustard, candied nuts and grapes, it does little to mask the failings of flavor.

Speaking of fails, the di parma, basil, tomato and mozzarella flatbread is not even on par with Stouffer’s French Bread Pizza! Not that I’ve had it in nearly three decades, but I ate a shit-ton as a kid. But saving the flatbread from the dubious distinction of the low point, dessert swooped in with an apple pie so bad we didn’t have more than a bite or two. Instead we focused our efforts on the Sherry B’s vanilla ice cream on top.

So not a great showing, but not entirely a train-wreck either. I look forward to them upping their game. And hopefully the MTA does the same.