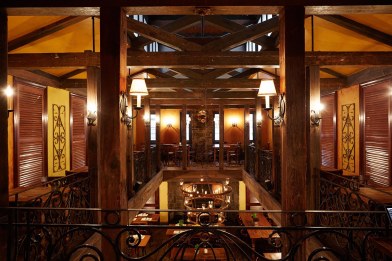 Finally, a newbie with rave reviews that actually lives up to them! Yes, Alta is Al that (and a bucket of chicken). Set in a somewhat odd location for a tapas joint, an old Amish home (pictured). But, hey, if it works, don’t knock it.

In terms of the tapas itself, the hit ratio was most admirable. Going 10 of 12 with not one thing being bad and only two mehs. So let’s do role call, from best to mehs:

Top of the list has to go to the ridiculous parker house rolls with dill butter. So good you’ll wanna open a vein. Also muy delicioso are the bacon wrapped dates and olives (granted you could wrap garbage in bacon and I’d probably eat it), the scallops are money, the Brussels sprouts with green apple are inventive and much lighter than so many other sprout dishes getting love these days, and two different desserts, the sundae and the lemon tart also rounded out the best of the best. But there is an MVP from the meal that I feel compelled to give a shout-out to, the wine. The Morgon Beaujolais is phenom. This is now the second time I’ve had it (first at Scarpetta) and it is right up there with Prisoner, for those who are fans.

Now back to the food. A notch down toward very good, I would list the buratta with black truffles, the short rib with beet parpadelle and horseradish slaw and lastly, the warm chocolate cake.

Bringing up the rear would be the fried goat cheese with lavender honey. It’s clearly trying to do the Italian ricotta and honey thing, but misses significantly. The other non-starter, get it? Is the agnolotti with yam, shroom and cheese. As I caveated above, it wasn’t bad, but with so many other hits, it was surrounded by tough competition.

Speaking of, Alta is, or should be, some major competition next time you are planning to go out, because chances are, the place you’re thinking of going to isn’t as good. The name says it all. Alta is tops.