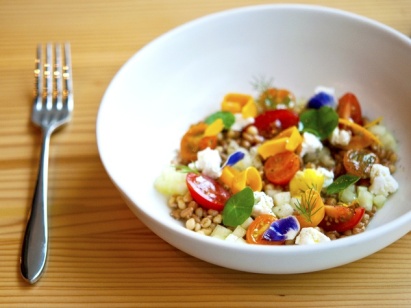 Born from a French Laundry graduate and found on many a Best of Austin list, Emmer and Rye makes you earn your experience before you even arrive, proving to be quite the trek from the heart of town, located on the far fringe of the booze district, which makes it especially fun to walk to, passing a Mardi Gras-esque scene to get to your grub. But as off-putting as the journey is getting there, the setting is really quite lovely. Somewhere between chic and quaint, the décor nails it with rustic details like an herb garden out front, mixed with more contemporary elements like clean white subway tiles contrasted against oiled bronze hardware.

As for service, I’d like to say that it was great, because they were definitely friendly and accommodating, but when it came to their recommendations they seemed a bit out of touch. Also, while the dim sum cart concept starts off charming, it quickly turns extremely annoying because they are constantly interrupting you every two minutes, making it impossible to carry a conversation. Someone needs a rethink methinks.

Worse still, the intrusive dim sum went a miserable 1 for 4, the worst dish being the lamb tartar with green cherry tomatoes and charred fennel oil. It sounds as good as it looked with it’s beautiful crescent-shaped presentation, but texturally it was very chewy and it didn’t boast the kind of flavor one would hope. For more impressive raw flesh, try the Bison tartar at Spoon and Stable in Minneapolis. It rocks the wool off of Emmer & Rye’s. Then there were two completely unmemorable dishes in the middle and thankfully one resounding winner, which was not only the best dim sum of the night, but the best dish of the night. A green strawberry soup served in a meyer lemon sabayon. It might just be an ultimate for strawberry-kind.

As for things ordered off of the menu, I’ll work from high to low with the peak being the red fife spaghetti ‘Cacio E Pepe,’ made with Challerhocker cheese and chicory. Aptly referred to as an “adult mac & cheese,” it lives up to the description quite handily and deliciously.

After that I’d go with the soft polenta adorned with fermented mushrooms, fresh shiitake and mint marigold spuma (Italian soda). It’s definitely good, but I’m not sure if soft polenta is even capable of being bad.

I felt similarly about the burrata toast with straciatella, kale, mustard frill and black butter. A convoluted, self-indulgent chef’s (Kevin Fink) attempt to make something unique out of a dish that would’ve been every bit as good, if not better, had he just kept it simple.

So after a myriad of mediocrity I decided to skip dessert in favor of one last spoonful from the bowl of green strawberry soup. So good.

Per the votes of fellow Yelpers, we followed in their footsteps for better and for worse. The better was definitely the lamb tartar. My favorite of the meal.

Next would be the hot dogs. Quite respectable, with a nice twist on toppings.

Third would be the Thai sausage. Unfortunately a little too repetitive to the dogs in flavor, so I would recommend an either/or scenario.

And now for the worse… The cubano (AKA Pig’s Head sammy) was just “eh.” It was woefully lacking in mustard, which threw the whole thing off balance. It just pales in comparison to the likes of Rocket Pig or West Branch. Or even Sophie’s. Wouldn’t even crack my top 100 cubanos.

But all in all, a solid showing. Just not the 4 or 5 stars people are throwing down. So I’m giving it three, knives that is. Just like its sibling Resto.