I swear this place must’ve made it onto at least half a dozen top lists in NYC, from Thrillist to New York Magazine. Well, unless you’re caught up in some cockamamie Brewster’s Millions scheme where you’re trying to squander your hard-earned coin, I’d say skip it, because it’s almost all’unda whelming.

From the moment the first starter hit the table things were off. The arancini with black truffles were so lacking they should be blacklisted. Not even the faintest hint of earthiness from the truffles, which most likely didn’t come from France. And no butteriness or creamy cheese to make the risotto shine from within.

The polenta crisps had their issues as well, served with a baccalà montecato dip (cod salad) that was so incredibly salty no one was able to endure more than a single bite.

The best of the lot was easily the duck crostini, but that was in large part due to the lack of competition. Almost like a foie gras terrine, the duck was silky smooth, spreading over the toast like a blanket of richness, sweetened with pickled Asian pear and contrasted with a little hazelnuttiness.

I shared the short rib risotto for two (pictured) with a friend, and fortunately she didn’t disown me after talking her into it, because it was a huge mistake. Both in physical and conceptual terms. Starting with the physical, let’s just say that I think they misprinted the menu and it was supposed to be for 20. That, or Fred Flintstone was in the kitchen and no one ever bother to discuss portion control with him. Also, it’s not a risotto dish. It’s the friggin’ side of a cow on a plate next to a drizzle of tomato mostrada and a tiny bowl of Arborio rice, so don’t be fooled by the misleading description. Also, just don’t order it, because it’s too expensive for what it is and how it’s served, “sous-vide” as they like to call it. Or “raw,” would be another way to describe it. The server tried to convince us that the color was a result of the sous-vide process, but I can assure you that the texture didn’t lie.

The garganelli was much, much better, prepared with peekytoe crab, citrus and tarragon. But somehow it still didn’t reach the level of expectations. If you want a truly special crab pasta try NoMad or Frankies 457.

Then, just when all hope seemed lost, All’onda rallied with an Ultimate. The Brussels sprouts are as good as the reigning champ Ilili. But this is no copycat. All’onda goes its own way, using candied pancetta and bottarga (dried mullet roe) to harness greatness. It was so incredibly good, the Japanese eggplant turned green with envy.

Another surprise came from the dessert course and while I usually don’t recommend olive oil cake, this was the best I’ve ever had. But considering it’s still just olive oil cake, it’s hard for me to get so excited that I can declare it an Ultimate. I suppose it is though, trouncing the likes of Maialino and The Inn at Pound Ridge.

The apples were also good, basically a deconstructed crumble. And the sorbets were delicious as well, the best being the kiwi.

And last but not least, a shout out to the cocktails. The basil gimlet was nice and refreshing and the La Serenissima was nice and spicy. But while it had its moments, it had its misses. Too many, if you ask me, to ever call it one of the top new spots in the city. 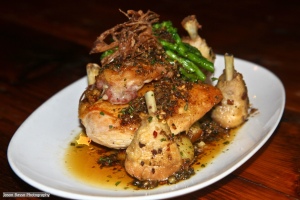 Umm… I’m gonna go with WOW! That pretty much sums it up. I loved just about every last drop of this restaurant and ate most of those drops as well.

To start, the décor is great. Just teetering on the edge of casual and beautiful. With an energy about it that hits you the moment you enter. Some may find it a bit loud, which it is, but that’s part of the fun- having you yell at each other about how good your food is.

As for service, our waitress was tremendous. Not in size, but in personality and attentiveness, without ego or plastic undertones. But not flawless either. For example, our cocktails came quite a bit late to the table, mid-way through our starters, but this was do to the bar losing the ticket. Now, normally you’d think this would be cause for docking a knife, and normally it would be. But is it the rarity of flawlessness that matters or is it how they handle the occasional hiccup? In this case, both the waitress and bartender came over to personally apologize for the mix up and delivered the drinks within a minute after. And yes, they were worth the wait. Especially the Summer Sangria with a richness almost as if there was Bourbon in there as opposed to wine.

But by now you’re probably getting pissed because I haven’t gotten to the food yet, so let’s get to it.

First up would be the amuse bouche, which is comprised of two dishes. A basic ceviche that is nothing to write home about, and a wonderfully explosive cream cheese puff pastry, that is worth flying home about.

Next came the buttery brioche-like bread which was so buttery and delcious, the fact that it came with butter was like gilding the lily. But as good as the bread is, I strongly recommend that you skip it in favor of the Texas Toast that comes with the Spicy Lobster which was so incredible it was as if my taste buds had died and gone to taste bud heaven. The lobster meat and bread in that sauce- OMFWow!

But not to be outdone, the tortellini is also very impressive, packing it’s own heat and a complexity to its sauce that unfolds in your mouth like a story.

Wait, I probably should’ve saved that description for the Halibut entrée, because that sauce was also quite the tour de force, minus the heat. But so rich and layered it was more like a meat dish.

Now here comes my one nit. And I blame myself for it. I had gone there fully prepared to get the highly acclaimed chicken, but our served talked me out of it and I went with a lamb special instead. Now, the lamb was far from bad, but at 48 bucks a plate, not bad IS bad. At that price I should’ve lept out of my chair and danced a jig after every bite.

The dancing, however, was not far behind, because the S’more dessert had me giddier than Kevin Bacon in Footloose. Just the presentation alone- well, of everything really, but with the “charred” marshmallow on a stick and the salted “chocolate bar”- if my tongue had hands it would applaud.

The other dessert was no slouch either. A deconstructed key lime, which had it been the only dessert on the table would be receiving all the adulation right now.

Such a treat. Finally an Iron Chef restaurant that lives up to its metal. A tribute to the fact that he is still the one actually in the kitchen. Saw him with my own eyes the last time I went.

Which brings me to another evening of incredibleness. The amuse bouche this second time was a touch less impressive. An homage to the NYC bagel and smoked fish. Good, but not grand. The graganelli with short ribs and black truffles, however, was mood-altering-good.

Also, this time I had the heavily revered under brick chicken and I have to say, while good for a roasted chicken, it’s still just a roasted chicken. I’ve had MANY a chicken dish that bests it. From One in Irvington, NY (RIP) to ABC Kitchen to Son of a Gun in LA. Don’t get wooed by the hype. There are so many better options on the menu.

And once again, come dessert, Marc knocked it out of the park. The best “pumpkin pie” I’ve ever had. Made in souffle form, served with a very complex and equally delicious sorbet made from bourbon, squash and three other things I can’t remember. If an afterlife exists, and they serve food, this must be what it tastes like.