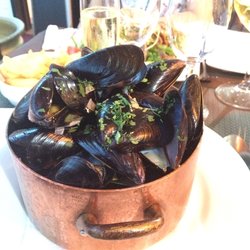 Just before the bottom of the hill on the main drag in Old Cannes, there is a little alley to the left or right depending on which direction you’re heading, and within that alley you will find three more restaurants tucked away from view. Now I can’t speak about the other two, but Chez Vincent was a nice find indeed.

The night started off with a great bottle of Syrah and very friendly service, and as for the meal, it started off with a gooey, baked Camembert served with sliced green apples and toast. Unfortunately the apples were sliced razor thin and didn’t hold up to the cheese at all. Also, the toast was actually a bit stale. Fortunately, the baguette in the breadbasket was incredibly fresh, so we used that to sop up the cheese instead and it was nummy, nummy.

We also did the scallops wrapped in bacon, which is an oldy but a goody. And finally another classic starter, a whole artichoke served with Dijon for dipping. Both were also very good, but nothing game-changing.

For entrees it was a mixed bag. My mushroom and chicken risotto being extraordinary, the elbow pasta being interesting and the salmon tartar being a touch bland as the fish itself was overpowered by the dill and onion within. And while the French fries served with it were quite soggy, they were actually the best thing about the tartar. That said, if you want the fries without the salmon, I’d suggest going with the burger. It looked crazy good. As did the moules frites (pictured).

And speaking of crazy good, the tart tatin for dessert is another must get, nearly equal to the risotto and between the two enough to have me flirting with the thought of 4 knives. Unfortunately the dessert medley was not-so fantastic, keeping things firmly supplanted at three.