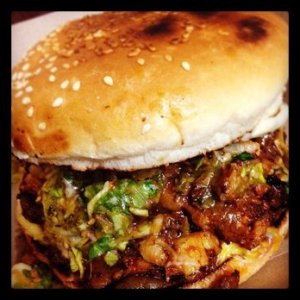 I know that Koji is supposed to be one of the originators of the whole food truck craze, but Ford was the originator of the automobile and I think it’s safe to say that others have since improved upon the concept significantly.

Well, after eating Koji’s Pacman Burger (pictured) I can say unequivocally that Koji ain’t what she used to be. Perhaps due to a slide in Koji’s own performance or a testament to how many other food trucks have stepped into the ring, upping the game? Whatever it is, Koji is now a featherweight amongst heavy hitters.

So unrefined is the Pacman, tasting exactly as it sounds, “packed,” with 10 pounds of shit in a 5-pound bag. Three different meats, two salsas, sesame mayo, jack and cheddar cheeses, salad and some crispy things on top, ya know, because why wait to have a coronary when you can die today?

But heaviness is most definitely not why I am getting all over Koji’s case. It’s because the burger tasted like nothing more than a bunch of greasy slop on a bun. No separation between textures or flavors. In fact, if it weren’t for the Sriacha, I probably wouldn’t have even made it halfway through it, which is about as far as I got. Not because I was full, but because I was worried about the gastrointestinal repercussions that might ensue. Fortunately the “retaliation” was milder than expected. My review, not so much.