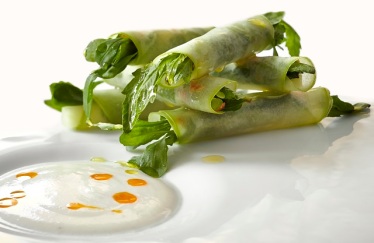 I don’t mean to come off douchey, because no one needs a Douchey Foodie in their lives and let’s face it, a Ferocious one is already bad enough as is, but if you have the means, I highly recommend a vacation at the Ritz Carlton Dorado Beach Reserve. It is stunning on so many levels you won’t know whether to shit or go blind or just lie on the beach and gorge yourself full of deliciousness, like some wannabe Julius Caesar reincarnate. In fact, I could easily drop a thousand words waxing on about the spa alone, a four-acre, outdoor compound the likes of which you’ve never seen. But that’s for a different blog. So getting back on track, the thing that impressed me the most about Dorado (other than the spa) was the quality of the food at the restaurants, normally a challenge for even the ritziest of island retreats (pun intended).

Enlisting the help of famed chef, Jose Andres as their focal point in the dining scene, Dorado manages to stick the landing like Mary Lou Retton with rock climbing spike boots strapped to her feet, to use a self-dating sub-reference. And I don’t say this lightly, because truth be told, I’m actually not a huge fan of Jose. I typically find his cuisine too tricky for its own good, but Mi Casa is a home run (again, intended) way better than The Bazaar in LA.

Now it doesn’t hurt that we were sitting out on the balcony overlooking the Caribbean waves as they crashed into the rocks whilst a symphony of whistling tree frogs serenaded us, but the inside is nice as well. Just hard to compare to the alternative.

Starting with drinks, the Silver Lightning cocktail is quite nice and refreshing, although I don’t quite recall everything that was in it. Cucumber and a silver rum is about the best I can do. Apologies. I was on vacation, so hopefully you’ll find it your heart to forgive me. The wine selections by bottle and by glass are also impressive and service is pretty impeccable throughout 90% of the resort or more, and at Mi Casa it is no different. Waiters were attentive, elaborate with descriptions and knowledge of the menu and best of all, very forthcoming with the recommendations.

Of the recommends, we went with jamon sourced from black-footed pigs which are apparently only fed acorns. It gives the meat a nice underpinning of nuttiness, and the meat itself is very buttery, silky and delicious. On the downside, the tomato bread they serve it with doesn’t do the meat justice. Would love to see this paired with something more worthy, that actually compliments the flavors of the charcuterie more so.

The other reco we pounced on was the sauteed shrimp with arbol chili (similar to cayenne), poblano peppers, shallots and aged black garlic. It was phenomenal. So complex and layered with rich flavors that it might just be one of the best shrimp dishes I’ve ever had. Granted I’m usually just as happy with a good old shrimp cocktail and some kicking sauce, but that should take nothing away from this remarkable dish.

Our only zag from the recos were the Brussels sprouts, lightly sautéed and served up with dried apricots and a medley of other goodies. Unfortunately, this was the biggest miss of the night though, shame on us. Not that it was bad, but the sprouts were decidedly overpowered by the cots in a pretty big way.

For our entrée, wifey and I split the halibut, which was prepared flawlessly, served over a creamy leek purée that danced with the fish like a ballet in your mouth. The perfect light compromise should you want to save room for dessert, which you do. Trust me. Because it steals the show.

First let’s discuss the casa-shaped chocolate ganache, drizzled with flecks of salt and served up with spiced, candied hazelnuts and a heavenly praline ice cream. It is the richest house I’ve seen since the Breaker’s Mansion in Newport, RI. But as good as it was, the deconstructed key lime pie swooped in and bested it. So inventive with the pie on the bottom, a crumbled, crispy crust through the middle and a burnt meringue on top. So inventive. So magically delicious. But is it an Ultimate? Whoa, mamacita yes it is!

So bringing it home like a champ, Mi Casa is also bringing home 4 knives along with it. 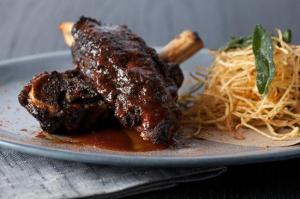 A unequivocal upgrade from SD26 (RIP), Black Barn slaps you in the face with energy the moment you enter, with its lively bar up front, adorned with sleek décor elements done in such a way that honors both the country and city, making the Osmonds proud. Especially in the main dining room in the back, where they really embrace the mix of design elements, complete with a framed out “barn” looming overhead. The only thing taking away from the vibe in a pretty big way is the tablet-style cocktail and wine list. It just cheapens the experience right as you sit down, making you feel like you’re in one of those iPad airport restaurants.

In terms of service, it was a bit spotty, proving to be noticeably lethargic on the bookends with both the cocktails and desserts taking an eternity. Then there’s the matter of our waiter forgetting all about delivering us a bread basket, probably because he was too busy delivering his table-side theatrically, obnoxious Shakespearean presentation of “The Menu.” This guy was so over the top we felt like we were being waited on by Charlton Heston in the Ten Commandments.

Fortunately for Charlton the cocktails were very good. The winner of the two I tried was The Bad Seed, made with Buttered Corn American Whiskey and cayenne pepper dust. It was spicy and buttery in all the right places. Yes, it’s good to be bad. The other cocktail was the refreshing Cider House Cup, served in a copper mug, which seems to be all the rage as of late. Made with Apple Jack, fruit and lime juice. It’s a nice yin to the yang of The Bad Seed.

For starters the Beau Soleil oysters were oysters. Fresh, but nothing spectacular. Served with all the usual suspects from lemon to vinegar to cocktail sauce. The seared foie gras with green apples was also just okay, missing the broad side of a, well, barn, with a dish that should’ve easily been a layup had they just given it that hit of sweetness that is normally so germane to the dish. But weakest of all was probably the pumpkin salad, which was so unimpressionable that it might as well have never even been served to us and I doubt anyone would’ve ever noticed.

On the plus side, the mushroom toast with tallegio was good. Not what I would call it incredible, but amidst the losers it was served with, it was a beacon of hope. And speaking of hope, we finally held out long enough for that forgotten breadbasket I mentioned earlier. But once it arrived, it quickly became apparent as to why they had forgotten. Because it’s pretty forgettable. Although I will hand them the award for the most conflicted spread ever served with bread. A pat of butter topped with balsamic vinegar, sitting in a pool of olive oil, surrounded by roasted garlic cloves. Yes, all of that and yet it still failed to wow.

Sadly, the entrees didn’t fare much better. The scallops were just okay, only made mildly better by the potatoes they are served over. But compared to the amazing scallop dish at The Clocktower across the park, I wouldn’t wipe my ass with these. Not that you should ever wipe your ass with mollusks, that’s just gross, not even sure why you brought it up?

The rib eye with chimichurri was also just okay. The meat itself was nothing special at all, so it was in dire need of something to submerge it in, hence why they serve it with the chimichurri, I suppose. But even that wasn’t enough to mask the inadequacies of the dish. Nor was the cayenne popover, which was a nice touch, props for that one, but it’s obviously a borrowed concept from BLT and not quite at the same level, nor size. Still, I appreciated the effort.

And just when the barn was about to be set fire, the best entrée of the night came in to save the day, the sweet potato ravioli with bacon. Not only was it good, it was crazy good. Then, they followed that up with two killer desserts, the rum soaked bread pudding, which was my favorite, as you can imagine, and the other were the salted caramel ice cream sandwiches which were pretty dope as well, to use a horribly dated expression that I’m hoping to bring back into style. The weakest of the three desserts were the warm chocolate brownies. They’re not exactly bad per se, but when you can get a better brownie at Pret, it kinda makes it seem ridiculous to pay over 10 bucks for something inferior.

Such a shame. I had higher hopes for Black Barn. Sure, it had its spots of brilliance, but they were lost in a sea of too much darkness. Or should I say “blackness?” Yet I still stand by what I said at the beginning. It’s definitely an upgrade from the previous tenant, even if the misses outnumber the hits.