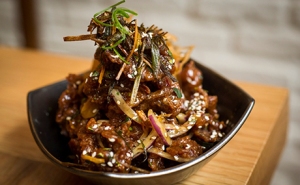 I think there should be a law mandating that places take reservations. I mean how absurd is it that by 6:30 pm you could already have a 90-minute wait? Oh sorry, that was Spotted Pig around the corner, which we gave up on and walked right in to Redfarm, who also doesn’t take reservations mind you, but at 6:30 pm it’s nowhere near as bad as The Pig. By 7:30, however, you’re fucked, so still try to get there early if you hate waiting, which you will if you try to do it at their minuscule bar that’s smaller than most powder rooms.

As for the dining room itself, it’s also pretty small, yet they manage to pack a lot of farm-like fun into it, with wooded beams and pipes overhead adorned with hangers carrying everything from chopsticks to plants to menu highlights. And while there are a few smaller, more intimate tables along the sides, most of the seating is taken up by large communal tables in the middle, so not the best place to discuss your brilliant start-up idea that’s gonna make millions.

Fighting the vibe of the décor, unfortunately, is the very rigid staff, who demands you order everything at once, which zags greatly from the dim sum norm. And my other big gripe with service is that there is zero thought put into the chronology and flow of your meal. Meaning, they bring you the dishes without any semblance of rhyme or reason. Some starters came after dim sum. Some of the dim sum came after our entrée. Heavy dishes came before lighter ones. And it definitely effects how you enjoy each dish.

So to help you forget about such annoying things, I recommend one of two cocktails, either the Le Club Hot with jalapeno infused tequila, smoked sea salt and cucumber- It’s spicy, smoky and goody. Or the refreshing Shiso Cucumber, which is a bit more typical with the whole gin and cucumber combo that you now find at every restaurant under the sun except McDonald’s, although it’s probably coming soon considering Taco Bell just started serving booze. Granted they do zazz it up a bit with shiso leaves, agave and lemon. The one drink to avoid, however, is the Bee’s Teas. It ain’t the knees. It’s disgusting. Made with chamomile infused bourbon, fig and basil. And while it may sound pretty good to you, it tastes like one of those herbal tonics you get from your acupuncturist, which are more painful to drink than falling off of the table and landing needle-side down.

Among the edible winners of the night, the best thing we had was a starter that actually came fourth, and should’ve been first or second, the kumamoto oysters with yuzu and meyer lemon ice. They were phenomenal! I could’ve downed a dozen of those without batting an eye.

My second favorite thing of the night might’ve been an Ultimate the more I reflect on it. The crab and eggplant bruschetta was just awesome. A twist on the typically boring crab toast, this one is served slightly warm and very complex with its nuanced blend of flavors and textures coming from things like kohlrabi slaw.

The waiter’s resounding recommendation, however, was the weakest dish we had, the spicy crispy beef (pictured). A total miss for me. And while it checked two out of three boxes, spicy and crispy, it left out the all-too-important third box, beefy! I felt like the little old lady from the Wendy’s commercials long ago. Where’s the beef? Because all I tasted were fried clusters of batter in Szechuan sauce. Tisk! Tisk!

Another dish I loved was the egg roll stuffed with Katz’s Deli pastrami, served with a spicy Asian mustard. Granted it’s probably the inner Jew in me talking, but oy was it good!

One of the most interesting dishes was the shitake, corn, jicama and roasted red pepper dumplings served with a chive shooter that when used as a chaser made each and every bite explode with contrast, not only of texture and flavor, but even temperature.

For our entrée, Wifey and I split the sautéed lobster, egg and chopped pork, which is easily enough for two people, and that’s about the only thing easy about it. Eating it is not. It’s messy as all hell and there are droves of chipped shell pieces in almost every bite, make it a bit hard to enjoy without looking like a Neanderthal. That said, the favors in the dish are very good, especially when you combine the egg, pork and lobster all in one bite, which is also easier said than done.

Come dessert we decided to lighten things up a bit (while also still getting dessert, because I’m a very weak man), opting for the key lime pie with key lime sorbet, which is good, but not great. The pie itself is a little too sweet for a key lime, so lucky for them, the sorbet is tart and refreshing enough to balance things out. The key (get it?) is to combine both so that it tastes like a key lime pie actually should. Or, if that’s too much work for you, then I recommend heading to The Dutch in Soho, instead, for what I would say is the epitome of Key lime pie perfection.

Of all the condiments out there, no other add-on completes me like mustard. I mean, first of all, just think about how diverse it is by comparison to other condiments. You’ve got your spicy, your deli, your yellow, your Asian, your textured, your sweet, your alcoholic- It’s enough to give ketchup and mayonnaise a complex. But perhaps my favorite thing about mustard is that it’s one of the only things in the edible universe that I sincerely love, and isn’t highly caloric and fattening. In short, mustard is the Ultimate condiment. And within that Ultimate, here are a few Ultimates:

South of New England, this mustard can be a little hard to find. But it’s not like you need to go to any fancy store to buy it. Stop & Shops seem to be the best bet (perhaps because they are a New England based chain). If there’s no Stop & Shop close to you, it’s worth the road trip (or odering online). I say buy a half dozen jars because you will be plowing through them like Walking Dead plows through zombie extras. It’s spicy and sweet and tart all at the same time, turning every sandwich it touches into an event.

If you’re a texture lover like me- preferring crunchy peanut butter over smooth and lots of pulp OJ over no pulp than Maille is your mustard. A 260 year old seeded mustard, born in the old country (France), and packed with so much flavor it can do just about everything apart from folding the laundry. It’s awesome for grilling. For baked fish, for salad dressing, for making dips, on sandwiches, on burgers, on Donner and Blitzin! In fact, the only mustard that’s even close to as versatile as Maille, is Grey Poupon, which brings me to mustard number 3.

Pardon me, but if you don’t have any Grey Poupon you should take a glove and slap yourself across the face. It’s so easy to come by and so friggin’ good you almost wonder why any other mustard exists. And like Maille it’s incredibly versatile. Maybe even more so. If a mustard could win the Noble Peace Prize I feel like Grey Poupon would have a very strong case. But just one caveat, there is the smooth original and a seeded version more like Maille. Both are excellent, but head to head on the seeded side, I go Maille, whereas Maille also makes a smooth kind and head to head with Grey Poupon, I give it to the Grey.

This last one is MUCH harder to come by unless you live in France or New England where mustard is basically a substitute for religion. Fortunately you can always order it online from Amazon.com for those not favorably in geographic proximity. Double fortunately, Maille is VERY similar and much easier to find if you don’t feel like ordering online, booking a flight or driving to the Northeast. The only difference for me is that Pommery is a touch stronger and the seeds are a teeny bit smaller, making the texture slightly smoother. The packaging is also the best of the bunch, served in an old fashioned earthenware crock with a red wax seal (apparently unchanged, as is the recipe, since 1632).