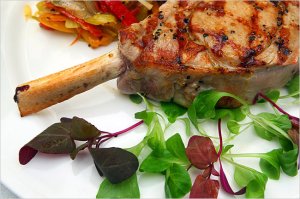 I’m not exactly sure how I managed to have two children born at Greenwich Hospital and never hear of Gabriele’s Italian Steakhouse, just two short blocks away. Had I known, I could’ve easily run down the street and picked up some serious to-go food while we sat and waited in the delivery room for things to get exciting.

Well, woulda-coulda-shoulda’s aside, Gabriele’s is definitely worth running to… and from. Even during if possible. In fact, try to get in as much exercise as you can, because once the feast begins, you can easily down a shopping cart worth of chow. And so I did.

For starters I recommend kicking off the gluttony with the prosciutto and charred pears with truffle honey. It was perfection and such a nice variation from the usual melon accompaniment. The other starter I would strongly urge you to get would be the black truffle crusted scallops floating on a bed of bacon, parsnip puree. Boom!

In the middle of solid goodness I’d put the short rib stuffed arancini (which are massive by the way, almost the size of racket balls), they are a little on the mushy side due, in part, to the truffle cream and the short rib inside is a touch dry, but at the end of the day it’s still risotto and short rib, so what are we talking about? The meatballs and the raw oysters will also handily please your yum box.

On the other side of the table there was also lobster and crab, but those evaporated before I could even lift a fork, so I’ll go on trust and make the assumption that those are also good. As is the sausage stuffed bread that comes even before ordering, because why have bread without meat if you don’t have to?

The one to avoid is the buratta. Very un-buratta like. Not creamy at all. More like a normal, everyday, run of the mill mozz.

I’m actually not the hugest fan of the word ginormous, mainly because it’s one of those trendy, made up, combo words like amazeballs or frenemy. But for me to accurately describe the bone-in rib eye at Gabriele’s, I think I’m going to have to suck it up, because ginormous is the only accurate descriptor I can think of. Like something out of the Flintstones, the bone extends way beyond the beef, clearing a good 18 to 24 inches, hanging off the plate. We’re talking a full grown cow’s rib. I’ve never seen a presentation like it and it’s damn impressive. Fortunately so is the meat, cooked spot on medium rare, the only way to fly, with good char and a nice and simple seasoning of salt and pepper.

The only other entrée I tried was the linguini with clams and it was down there with the buratta. Very flavorless and in dire need of crushed red pepper to give it the something it so desperately needed.

For sides, we chose quite well, between the superb charred broccoli, the wonderfully creamy mascarpone mashed potatoes and the truffle button mushrooms (they obviously have a thing for truffles here, which I fully support).

Last but not least, skip the whole breakfast for dinner movement- Gabriele’s goes one better and offers up a killer breakfast for dessert in the from of a Nutella stuffed French Toast. So god-damned gooey great you either gotta plan ahead for this one, or plan on loosening the belt to make room.

Service was excellent with the recommends (the rib eye, the French toast and a killer Amarone) and all things servicey, but it was Trivia Tony, the maitre’d, who stole the show with his custom catered questions about everything from sports to pop culture.

Décor is a miss for me on the whole with a very large, very underwhelming dining room, jam-packed with about twenty too many tables, not to mention decibels. That said, there is solace to be had, if you should be so lucky as to be offered the option, go for the “wine cellar.” It’s not a cellar by any stretch of the imagination, but it is a wine room. Set apart from the main dining room, it is quieter and much more intimate, with a décor all its own. The walls, as one would expect from the name, are entirely made of in-use wine racks, the tables are massive slabs of polished alabaster and the vibe is old world cozy. The fact that we had this room was a major player in the knife count I’m about to drop, which is much higher than I ever expected walking in.