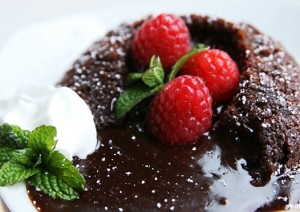 I’m not sure how this managed to force it’s way onto my Ultimates list, because I really don’t like peanut butter desserts. Yet, despite my long-standing hatred for their kind, Daniel managed to show me the light. Granted, it certainly didn’t hurt that it was housed within a rich, gooey, chocolaty and caramel-y casing, but well played Mr. Boullud. Well played.

I have been coming to Roku for decades and for decades they have been serving up one of the finest ends to a meal anyone could wish for. So, all you molten chocolate volcano posers out there, listen and learn from the master of chocolate lavadom. To start, the shell of the volcano is paper thin. Too many volcanoes wind up bready and thick and so the cake part overwhelms the gooey “lava,” leaving you with a chocolate tear drop as opposed to the gusher it should be.

Now, if it was just a bunch of gooey liquid chocolate lava everywhere that wouldn’t exactly work either, so these clever little bastards also stick little bits of cocoa bean into the lava, and let me tell you, when you get a bite of one of those- you’ll wish you were a cow and had four stomachs so you could enjoy it 4 times over.

Then, they serve it with this terrific, creamy vanilla bean ice cream and a few berries as garnish. Both of which complement this dish like Jerry Mcguire to Renee Zellweger.