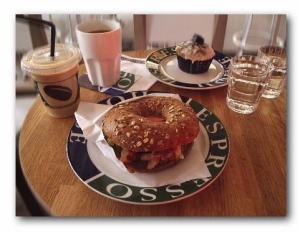 I believe this is a Swedish chain, or perhaps a Nordic chain or maybe even a European chain, but having seen more than one location, I know it’s definitely a chain. Basically a Starbucks with local flavor.

I had a chai latte which was milkier than most, but still managed to do the trick. Guessing a 60/40 chai to milk ratio is a part of that “local flavor” I spoke of.

The other thing I tried was a bagel and lox sandwich. Risky I know, but if there’s anything the Swedes know how to do, it’s smoke fish. Now obviously it was a Swedish version of the New York City staple, accented with the nice addition of mache on top. And truth be told, it held up, bagel and all.

That said, I’m not saying you should trip over people trying to get to an Espresso House, but if it’s convenient and you need a fix, consider this your Starbucks away from home.

There is a very charming vibe when you enter this café. Very bohemian with it’s colorful patchwork and eclectic mix of furniture set across from a bountiful case of goodies. Unfortunately, however, that’s just the front. If you venture toward the back, it quickly shifts from bohemian to Starbucks, which is a bit of downer. Not sure why they broke theme. Guess they ran out of money I suppose? Two owners couldn’t agree? One owner with a split personality disorder?

But I digress. Just sit up front and you’ll be happy. Oh, and the food aims to please as well. The blueberry muffin was moist and fresh and not the size of a Chihuahua, which tends to be the standard unit of measurement for muffins in the States.

Also very solid are the sammies. I had the prosciutto and cheese on focaccia which held its own amongst any I have had.

Definitely a worthy go to if you need a quick, affordable bite amidst your shopping binge.

While the hotel itself was just renovated in 2007 somehow the décor felt much more dated, the restaurant included. That said, its carbon-dating happened to be from a period (mid-century) that I fancy, so I really shouldn’t complain. And as for service it’s a tad slow, but friendly.

Now on to the vittles. First, let’s start with lunch, because that was the first meal I ate here, and by meal I mean mountain… of shrimp. I believe they call it a sandwich on the menu, but I assure you it’s a mountain. So much to that I defy anyone to reach bread inside of five bites straight down. It’s served open face and I’m guessing that somewhere in the fathoms below lurks a crouton, or something. Hard to tell through the heaps of baby shrimp. But was it good, you ask? It was just okay. The proportions, as you can imagine, were way off.

As for dinner, they fared much better. The veal tartar starter, for example, was quite good, accompanied by bits of pickled pumpkin which truly made the dish.

The mushroom pasta was also good, but a bit heavier than one might expect from a veggie dish, so dieters beware. 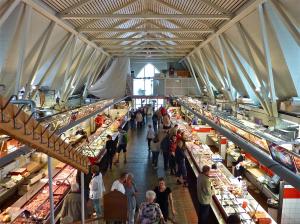 I love places like this. Off the beaten path. Odd. Little nooks that never seem to make on anyone’s top ten list. These are the gems that shine every bit as bright as the likes of Michelin stars IMFO (In My Ferocious Opinion).

This is why I loved Gabriel’s in the Fish Church so much. Located upstairs in an old church turned fish market right by the water. The décor is more bar than restaurant, but somehow that only seemed to add to its charm. And being that it’s located in a fish market, only added to its fish cred.

So, on to things edible. First up were the shrimp baskets, and while they were obviously fresh, I found them to be miniscule, making the work to meat ratio very unfavorable. Served with heads on them, which only added to the laborious task of shelling what ended up looking like a normal shrimp left in the dryer way too long. Fortunately it was served with a delicious, smoky tartar sauce. Unfortunately there was no cocktail option, so my spicy side had to sit this one out.

The half crabs were also quite the challenge to eat, having to jab a fork in them so hard I felt like Gemma from Sons of Anarchy using a poultry fork to – Spoiler Alert for Season 6 Finale!

And while the oysters were much easier than the other two, they were also not as flavorful as I would’ve liked. Granted I would’ve liked some friggin’ spicy cocktail sauce, but apparently that’s not how Goteborg rolls.

So after all of these misses you’re probably wondering what in the hell I liked about this place? Well, the cod entrée was spectacular! Served with potatoes, vegetables, egg and a white wine sauce. The phenomenally fresh fish blended into the bowl of ingredients like Girl Talk mixing up tracks on All Day.

Another nice surprise was the local pilsner. Quite smooth and much better than the local ale. Trust me.

Sadly, the church closed on a down note with their odd attempt at a deconstructed chocolate cake which tasted more like it was scooped out of a construction site. And what’s especially unforgiveable about this is that they only had one dessert on the menu. I’m sorry, but if you’re only going to put one option on a menu than the least you can do is nail it!

But oh the cod. I will never forget the cod. And the location. Okay and the beer. Our server was very nice as well, but so was everyone in Sweden. I think it’s like a federal law or something. Granted he did forget our fish soup, which I hear is quite something. Oh well, maybe next time.