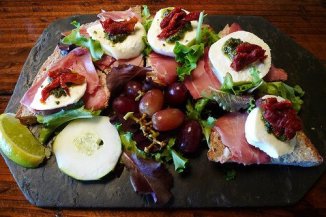 Just down the street from the painfully long line at Franklin’s Barbecue you’ll find a place that looks like it belongs in Berkley, CA with its granola vibe and granola-hipster patrons. Cozy, earthy, wood elements cover just about every surface with a large communal table in the middle, a la an LPQ (Le Pain Quotidien).

Unfortunately the food isn’t as good as an LPQ, which is disheartening that it can’t even best a global chain (granted a very good global chain), but Blue Dahlia isn’t a all-out miss per se, it just barely passes mustard. Speaking of which, the special frittata could’ve used some. Or habanero sauce, which is what I used to bring the gorgonzola, spinach, onion and peppers back from the dead. But even that wasn’t enough to mask the bad toast and lame salad they tried to pawn off with it.

The smoked salmon platter was also just okay, but I find it hard to fault a place in Texas for its lox when I’m coming from New York- #lowexpectations.

And the pomegranate lemonade, while also “just okay,” was not so okay because it was the compromise I was forced to make because they don’t have fresh squeezed juice. Not even the pseudo-fresh kind! We’re talking Tropicana! What kind of self-respecting, granola, Berkley-wannabe doesn’t have fresh juice?! I’ll tell you… The kind that’s “just okay.”