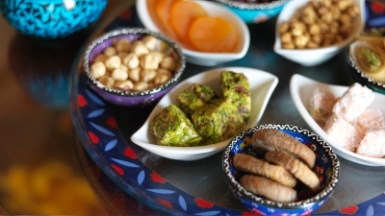 For those of you still hung up on Midnight Express, the notion of dining in a Turkish Prison is probably not high up on your Istanbul bucket list, but rest assured, your fears would be sorely misplaced, because this prison is the Four Seasons of prisons. No, seriously. It’s actually a Four Seasons. With prison yards turned into lush gardens, cells turned into rooms and the cafeteria turned into an expansive restaurant atrium.

Like all Four Seasons restaurants, the food falls somewhere between good and great, although I would temper your expectations toward the lower end of that spectrum, because compared to the Four Seasons in New York it’s not even close. I mean that food-wise. In terms of décor it blows New York out of the water. Crazy to say about a prison, I know, but true nonetheless.

The food itself is a classic array of the usual suspects, mezes and iconic Mediterranean dishes ranging from whole sea bass (levrek), to dolma (stuffed grape leaves), to kufte (meatballs), to lentil soup (lentil soup). And while they all hold strong, there are better to be had throughout the city. But the food is not why you’re heading here, it’s for the one-of-a-kind experience, and on that The Four Seasons Sultanahmet delivers in spades.