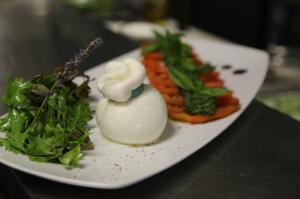 Until this restaurant I had actually never had an out and out bad meal at Cannes. Sure, I’ve had my share snores, but nothing this atrocious. The setting, however, is passable and the waiters were fine, but the food is a total non-starter.

The onion tart app is so oniony it’s off-putting from the very first bite. The caprese salad (pictured) is served with tomatoes that taste like they were imported from Monsanto. And the mozzarella that was with it caused me to question the maternal sincerity of the cow that yielded it.

The lobster pasta entree was fishy and salty in a disturbing sort of way and the burger and fries served as nothing more than sustenance. And that’s at 12:30am, when I was pretty famished, and a bit tipsy, making the level of difficulty to impress handily in La Petit’s favor, and yet they clearly missed the layup.

On the positive, I do have to admit that the raspberry parfait was pretty damn skippy, but I’m most definitely not suggestion you should head here just for that.

Such a miss, I want my money back and I didn’t even pay for it.