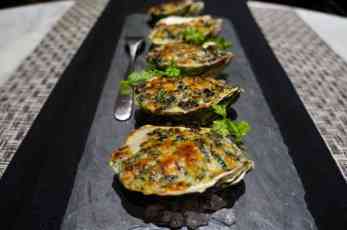 Normally I prefer my oysters like my Eddie Murphy, Raw. In fact, “prefer” is putting it mildly. Truth be told I tend to find something inherently very cheap about cooked oyster dishes such as this. Like something you’d expect to find at bas mitzvahs and weddings and other heavily catered events. Done with the sole purpose of covering up the flavor of the mollusk. Assumingly due to one of two reasons:

Well, at least that’s what I used to think, until Emeril showed me the light- along with some bacon. And about a dozen other ingredients. But somehow it was all done in a way so as not to drown the mollusk in a sea of over-preparation. Instead, he still somehow managed to pull the flavor of the oyster through this onslaught of other palate pleasers, rising up like a seventh wave of the attack. I say seventh as a nod to “Dream of the Blue Turtles,” because apparently the seventh wave is love according to Sting, and who am I to argue with Sting, because I truly did love every last complex morsel on the half shell.