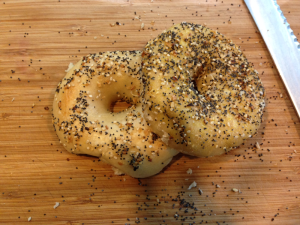 Definitely the best bagels in the area if you’re willing to endure the PAINFULLY slow service. And by “painful” I mean excruciating. For example, the the bagel in the picture above probably took about 15 minutes to slice in half. Okay, so that’s a bit of an exaggeration, but this is not…

The first time I went there I was only second in line with four employees behind the counter, so I figured I’d be in and out in a jiffy. Well, that was because I was foolishly optimistic about the natural order or the space-time continuum, but time itself was no match for the depths of inefficiency that unfolded before my bewildered eyes.

I witnessed a woman literally take one slice of cheese out at a time, using only one hand at a time, to then walk back to the cutting board where the bagel sandwich was being prepared some ten feet away, then back again to the cheese bin where she then proceeded to pick up a second slice, again using only one hand, not bothering to grab even a single other ingredient in the process. Then, there were multiple trips to the back room by every one of them, each only doing one task at a time, and each only servicing one request from the previous order, top to bottom, at a time. Somewhere an assembly line must’ve been rolling over in its grave.

But at least the bagels were worth it. Also, to be fair, since I’ve been back, they must’ve gotten enough complaints to speed up their act, either that or I’m still waiting in line there and I’ve just acclimated to the time vortex.